There’s Too Much Gosh Darn Technology

The world is crumbling and it’s your fault.

You keep making more technology, but everything new you make is used to reduce consumer surplus and enshrine control of corporate interests over all personal lives.

anyway, here’s a chart. we’re on the wrong side of it. 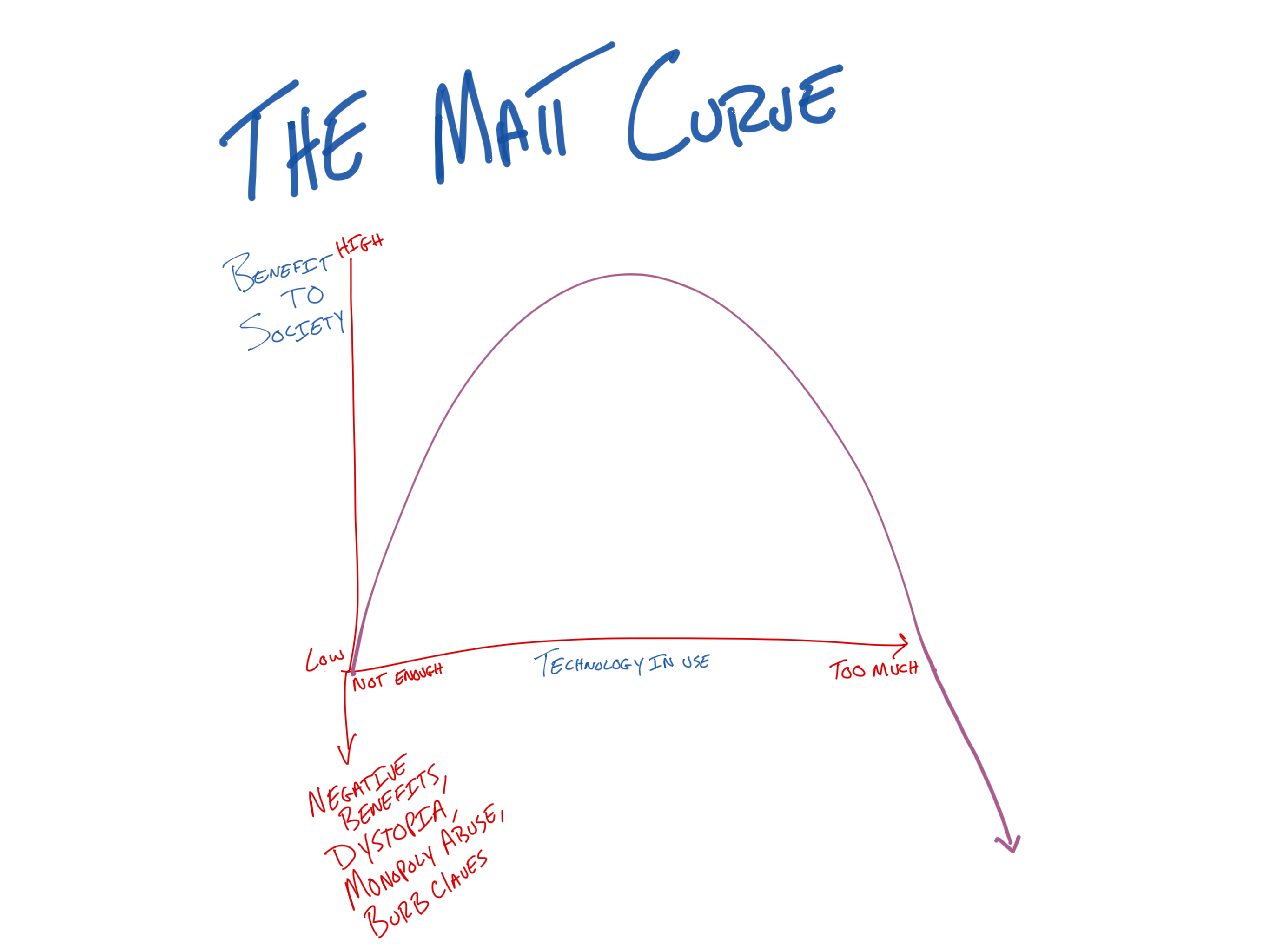 What does The Matt Curve™® imply?

But But But What About Da Sigmoid

oh look at you and your fancy words.

fine, so, what about The Not Curve? 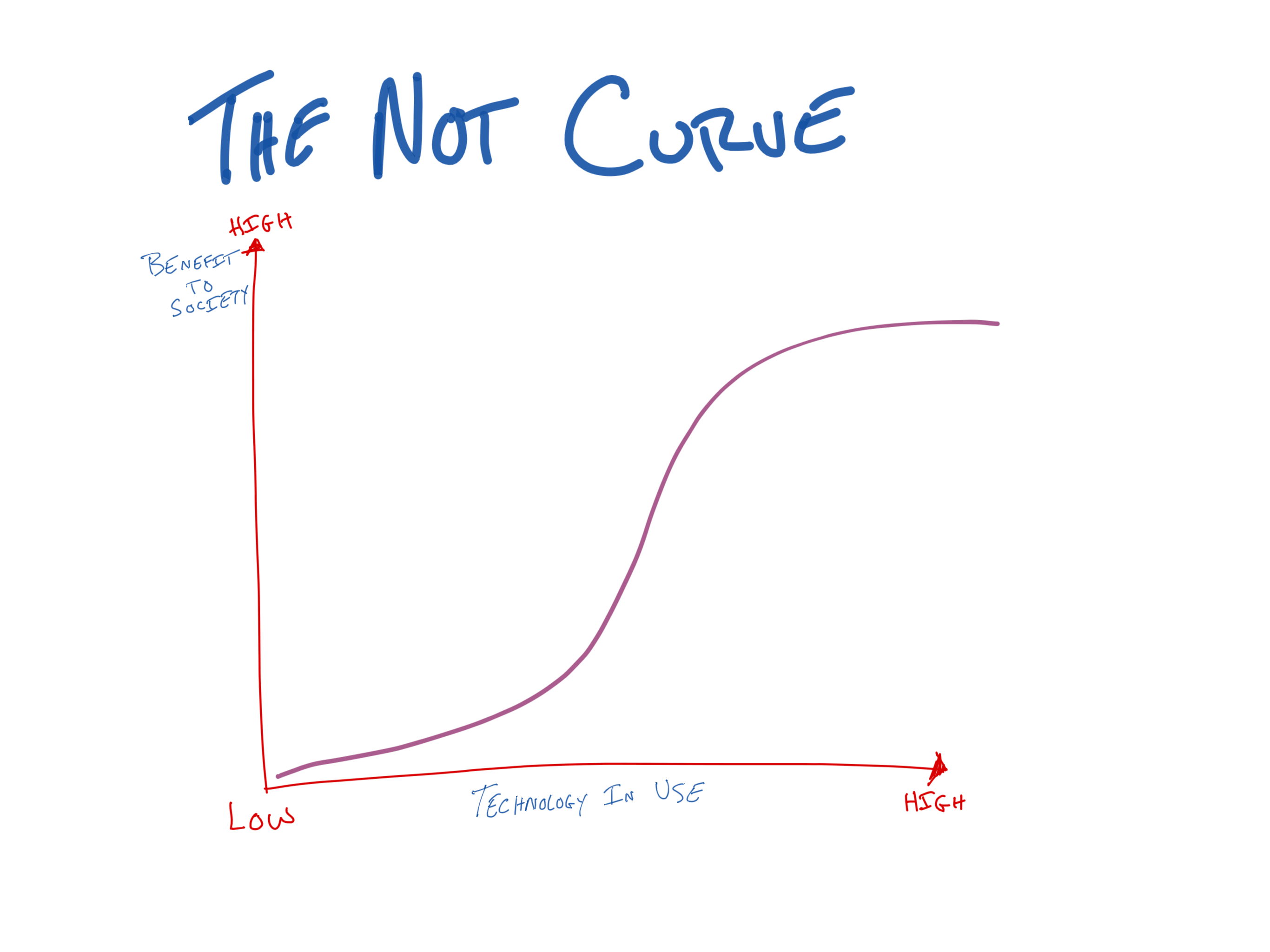 The Not Curve is a fancy lie because it says benefits of technology max out asymptotically and never decline or get worse ever again, but if you zoom out… 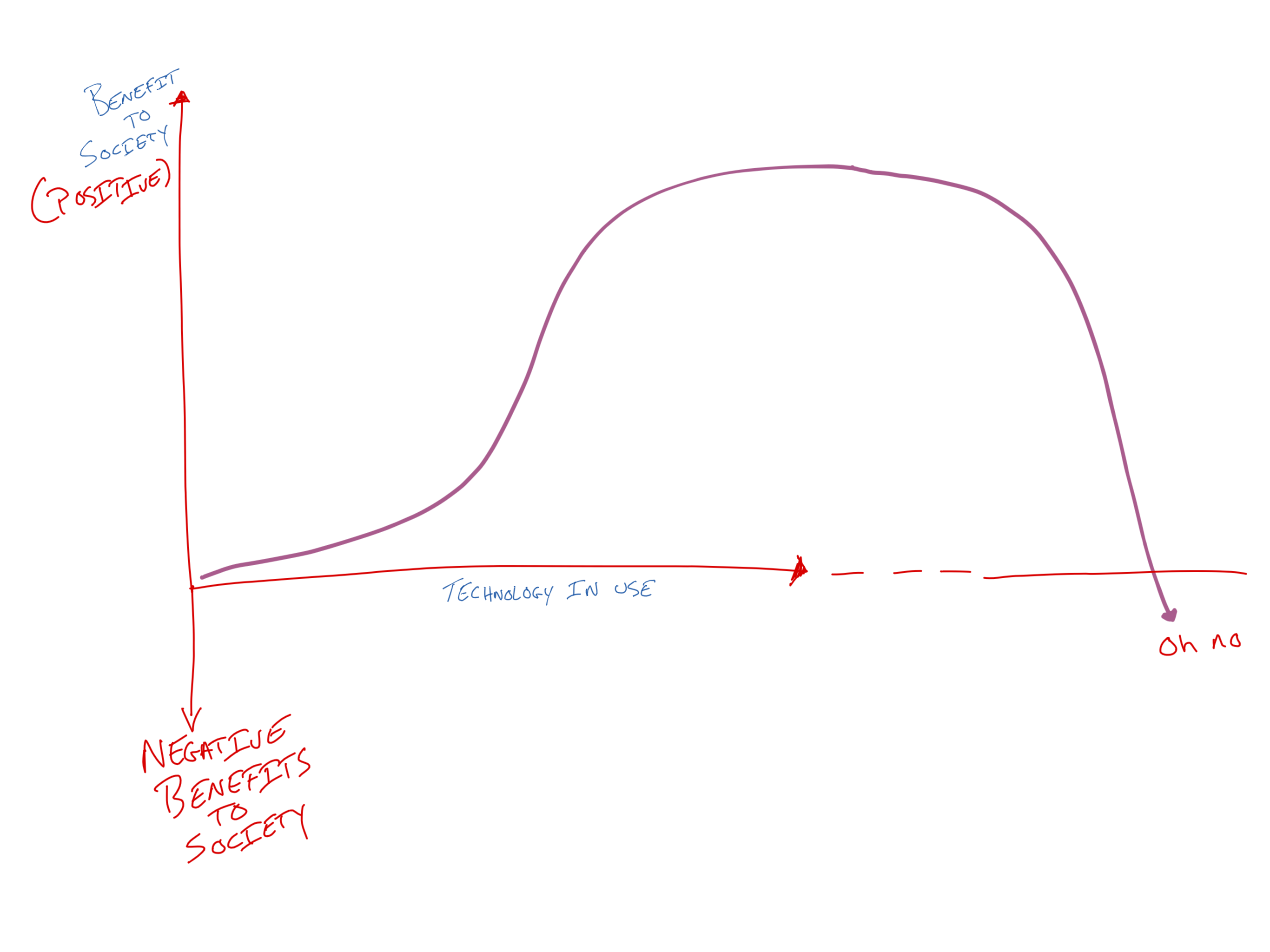 The sigmoid flips upside down and plummets into the depths of dystopia hellspace.

An Example A Day Keeps The Comments Away

For a concrete example, let’s use a real world case: Apple. AAPL. Our Savior from the evils of smugly backwards and manipulative and monopolistic Microsoft of the 90s.

I’ve spent years chronicling the downfall of Apple’s software. Each year, we think “the full-time-employed Apple developer employees must see the problems, right? They must be working on fixes. This year is just an anomaly because of time pressure. They’ll fix everything next year.”

Except, each year they decide last year’s bugs are not a problem anymore because only bugs introduced in the last 8 months should be fixed. Apple employees have said they essentially only look at bug reports between June and September, otherwise they are already in crunch mode working on next year’s broken software releases.

Apple’s literal internal policy is “we do not fix problems, we create new problems, which we then will not fix.”

The 2019 release cycle has shown Apple is a rudderless software development ghost ship1:

There is not one Apple enthusiast in 2019 who is happy with the state of Apple’s software ecosystem. Sure, the hardware (minus laptops and DOA Mac Pros taking 6+ years to redesign) are between fine and amazing, but hardware needs coherent software to run. Apple has shown no ability to increase the quality of their software over the past 5 years.

I wrote about Apple’s declining software quality 4 years ago and all of those points remain today: the once flagship feature of iPhones, music playing, has not worked properly since they created the iOS iTunes Apple Music Music App. Inexcusable.

Over the past four years, Apple hasn’t fixed their simple music player. My $1500 iPhone can’t play music reliably. Music playing is an “included as a defined benefit of the hardware,” but it is full of bugs and there’s no support. Interfaces lag. Items don’t sync. Features lag behind Spotify from eight years ago. Music positions don’t save. Tap inputs go ignored because some software layer isn’t listening when the UI is on the screen—on my $1500 music player.

When Apple launched the paid version of Apple News News App, the app’s startup time went from 3 seconds to 15-30 seconds and hasn’t been fixed in 9 months. I guess 30 second app start times on $1500 phones for a text reading app is 100% A+++ Super Bonus Time performance for Apple corporate developers. Plus, with the launch of Apple TV Paid Streaming Service, their Apple TV App also can’t do basic things or even save last viewed positions which has also been a problem with iOS Music Apple Music App since 2015, which Apple has spent almost no effort in fixing obvious UI and UX defects. The iOS Music Apple Music App even in 2020 can’t remember your last played music track or position—a feature from CD players since the late 80s!—and a feature other music players (hi spotify) get correct even on cross-platform players.

Wake up, Apple. You’re running a global software platform, not writing a freshman all-nighter homework project you turn in half complete then forget about forever.

Apple’s mobile music player still, for the past 5 years, starts playing tracks in total alphabetical order on every launch instead of remembering your last played track or playlist. The same global disregard and lack of respect for user lives has gone from Music, to News, and now to TV. What’s next? What will Apple’s broken software development process next lock us into so we end up having to spend hours a month on physical workarounds when software should Just Work for us and not us working for the software?

I wrote about Apple’s broken platforms 8 months ago as a 2018 year in review, and the 2019 year of hardware semi-updates combined with even more broken software releases have not made many aspects better. I mean, great, the iPhone camera has magic built in, but 1,000 bugs in other day-to-day operations (including top line iOS regressions and mail data loss across iOS and macOS and so much more) aren’t helping anybody feel good about Apple itself.

Apple has flipped upside down on The Matt Curve. Can they recover? Call me Apple, we can fix this together. 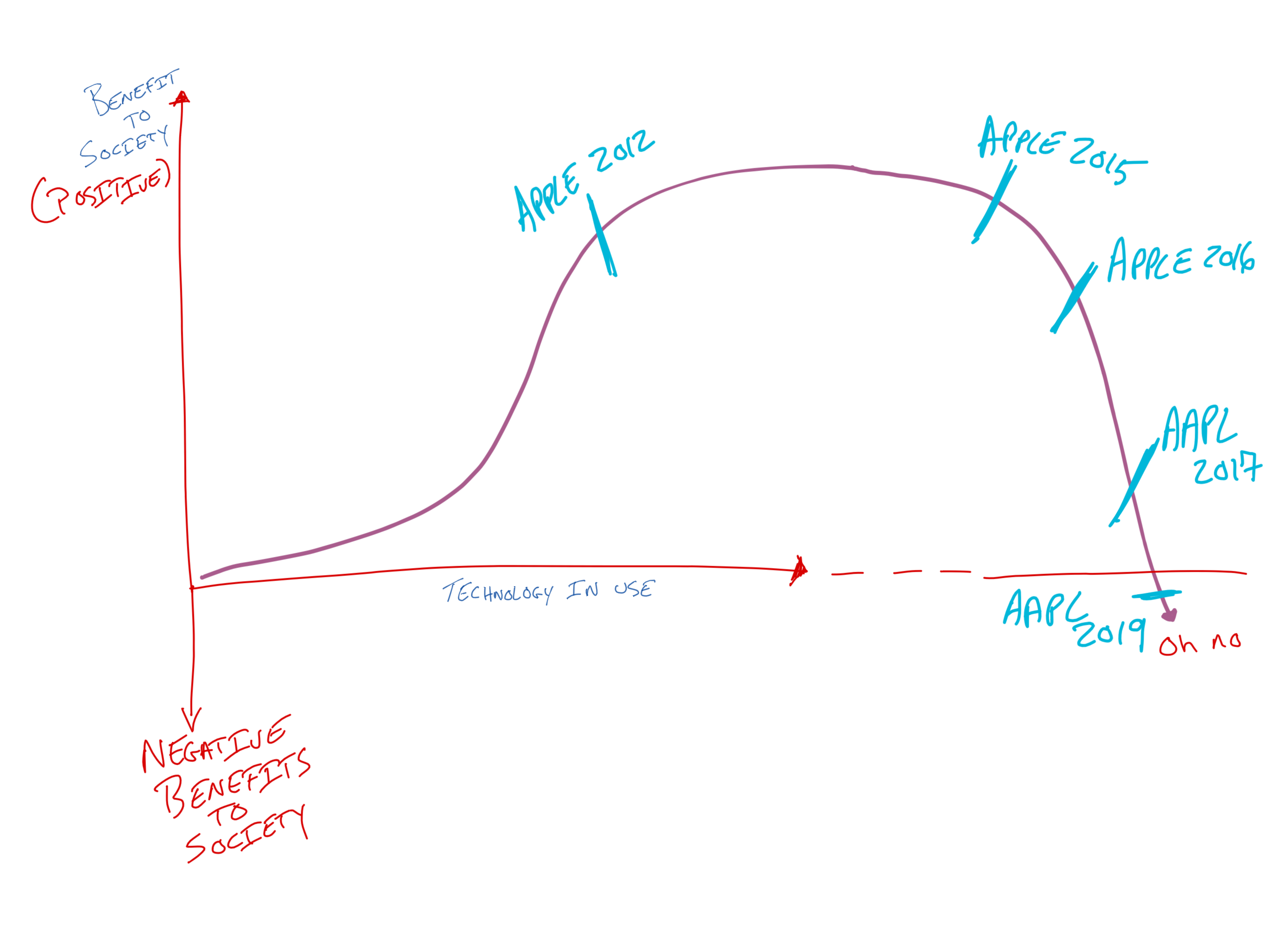 This is the first part of my 2019 moloch series. We had to cover failed tech first because technology turning evil is the basis for modern society inversions (or, basically a return to default pre-liberal-mid-1900s mindsets of monopoly, capital hoarding, as global destruction for personal profit).

Til’ next time, may the debugger be always on your actual error,