Apple held an event1. Let’s talk about it.

Warning: this post is about products, platforms, software, hardware, corporate structure, microchips, macrochips, and, as always, the future of humanity.

let’s get the borings out of the way first…

it’s nice Apple still makes a spyware-free streaming box, but they refuse to let up on their margins. $200 for a market dominated by $29.99 or free-with-purchase streaming sticks? congrats i guess?

is this also the first purely a color change change where they sent the product to “reviewers” to “social media review” the “new product?”

allowing extending apple care indefinitely on many products now. wow much unlimited margin for no work. good job everyone.

Apple has been sitting on the iOS mid-year update for what seems like 8 months now. They have actually useful features like “partial face view mask unlock confirmed by watch proximity” they are months and months and months behind shipping.

Apple still can’t quite get a grasp on software being a product requiring fast iteration and stable development cycles versus their deadline-powered hardware development being on point every year2.

AirTags are the least secret Apple new product category announcement ever (eclipsed only by AirPower if it had actually launched).

The universal consumer response to first hearing about AirTags is: “so I put them on things to track when they are stolen!” which is the one use case AirTags are specifically not designed to handle.

AirTags are Apple’s 3-5 year delayed answer to the Tile ecosystem, but most consumers aren’t seeing the immediate value in a “where are the keys in my apartment” tracker.

At first glance, consumers are expecting AirTags to have the fidelity of a cellular+GPS zero-screen apple watch with Find My for real time location reporting. The first dozen mentions in public after AirTags were announced involved “now I can track my pets anywhere!!!” which isn’t a use case of passive NFC/UWB/BT tags at all (not to mention the “anti-stalker” mode is also an “anti-anti-theft mode” because mass-produced, low-power, long-lived ambient location tracking requires the most difficult tradeoff decision making between security and privacy).

AirTags are designed to be “owned” by an account then report back on-demand when in range (of either your device or the network), but I’d like to see a developer-friendly version where we could program the tiles as generic bluetooth LE+UWB beacons for more experimentation (think: IRL social networks, IRL ambient dating, conference badges, etc). 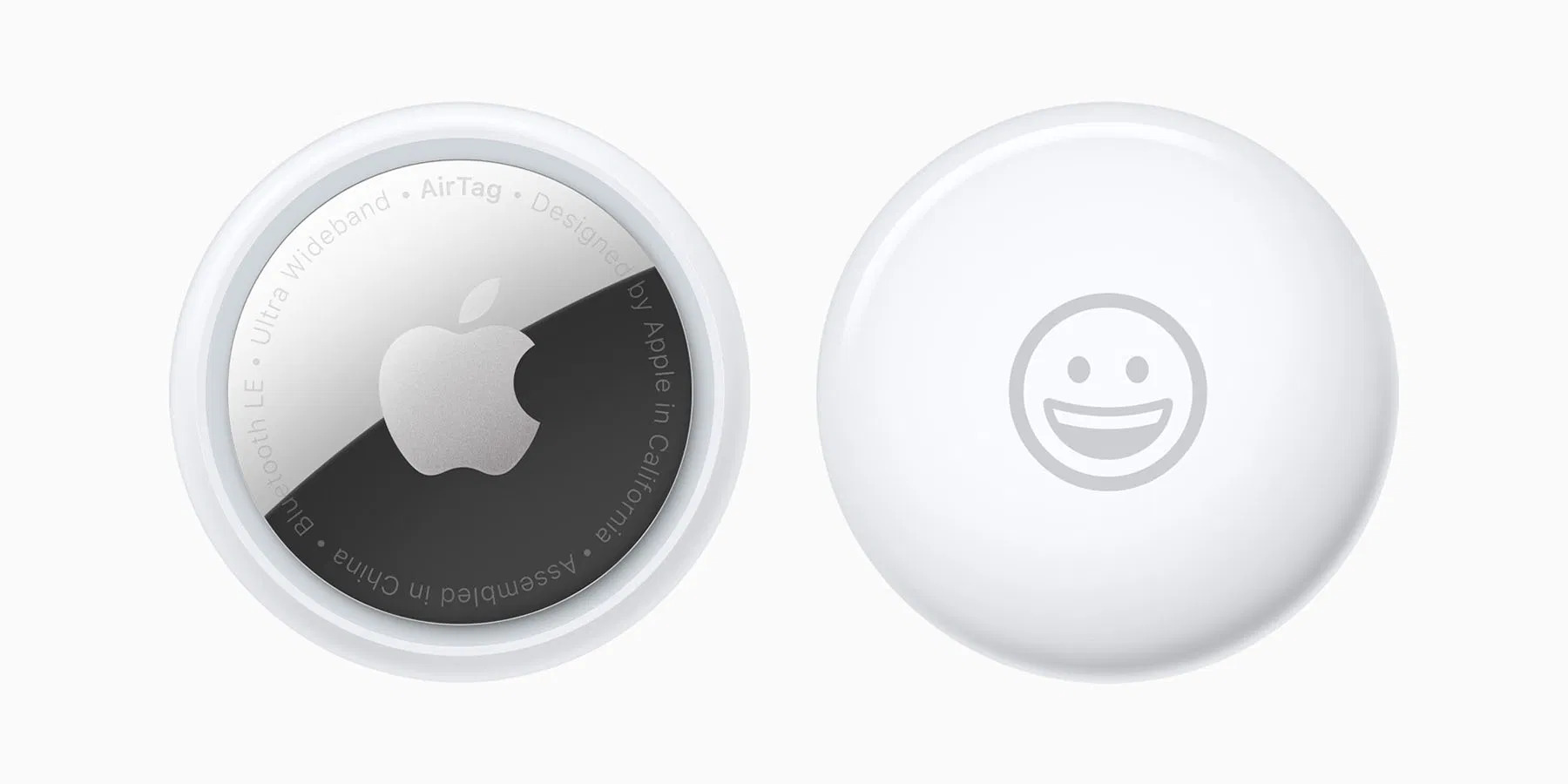 Another selling point of AirTags is one of those corporate “half truths / whole lies:” emoji engraving!!! 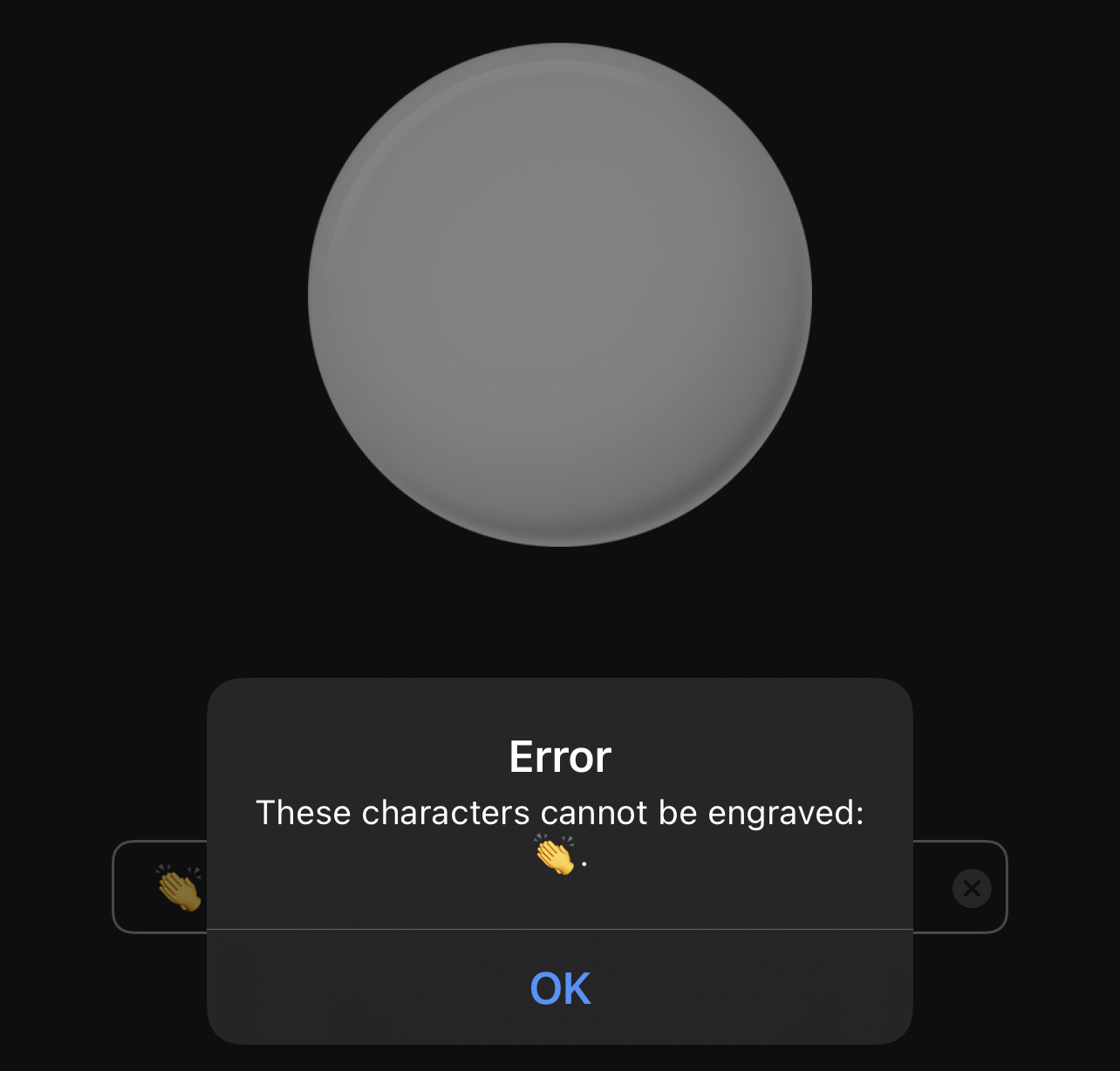 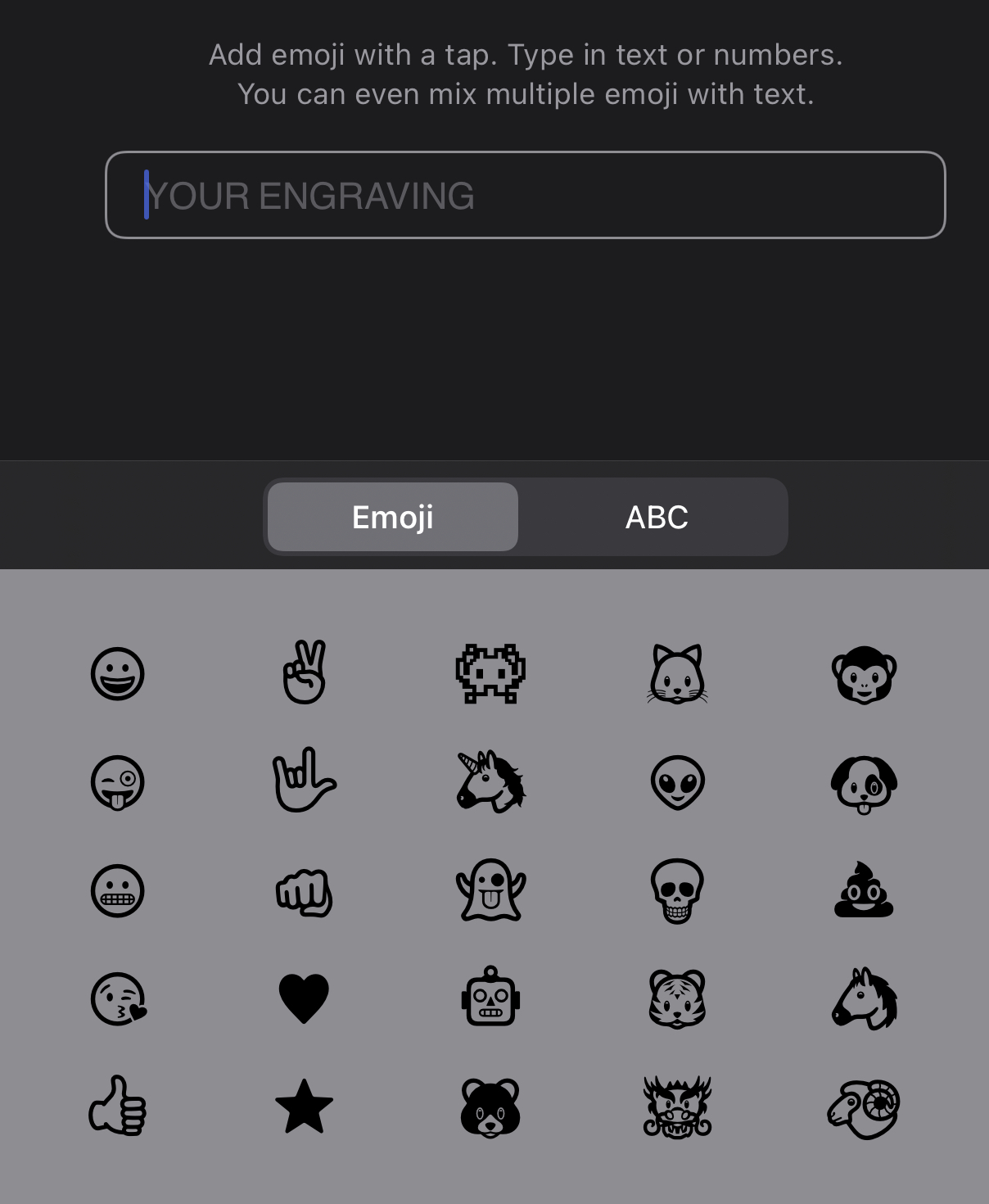 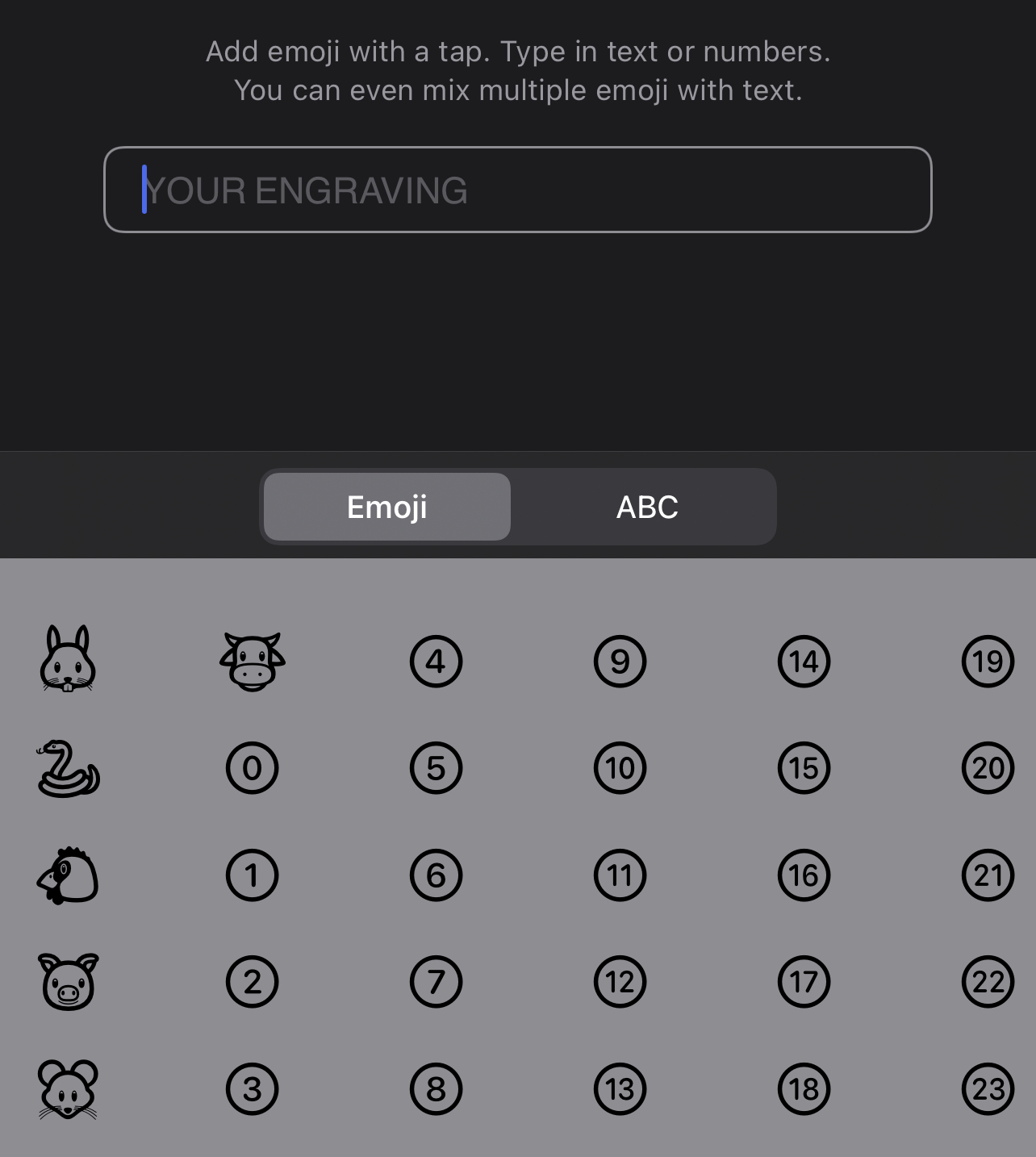 In truth, they give you the option of 31 “emoji replica clipart” glyphs? Which by the way, is both not “engraving” and not emojis? There’s also reports Apple is limiting combinations of “emoji” so you can’t, for example, do their horse clipart followed by poo clipart which would apparently mean “horseshit?” Their “engraving editor” refuses to submit that combination for ordering.

Also a nice future feature (if they create some sort of “developer-enabled” tag) would be either a couple tri-color LEDs on the front or a programmable LED diffused via a ring around the tag to enable visual status for different situations.

We can’t mention AirTags without mentioning the utter vulgarity of Apple’s continued exclusive branding with Hermes: products by oligarchs for oligarchs.

The retail $29 Apple AirTag (BOM: $3? $7?) when placed in a “Fawn Barenia calfskin leather” case suddenly becomes a $300 to $700 luxury item to the stars (BOM: $12?). Doubly nice how their market cares about only killing young cows for skin instead of using byproducts of other industrial production. 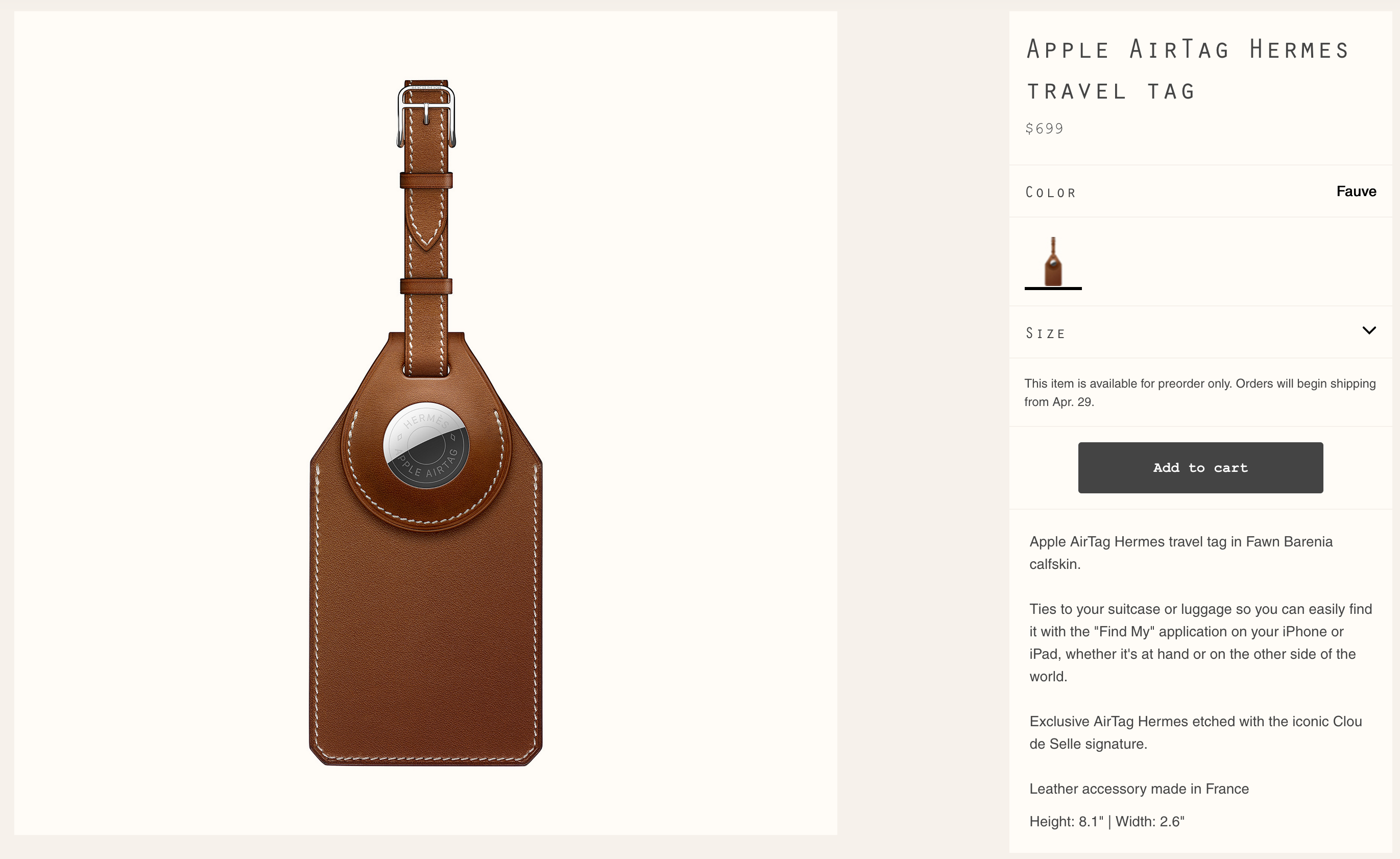 And the kicker: item description for these $300 to $800 abominations follows the “consumer misunderstanding of AirTags viewpoint” where the tags are assumed to be akin to cellular GPS location trackers and not the “actual product capabilities” of short range BT/NFC/UWB tags with best effort mesh network location pinging:

“Ties to your bag so you can easily find it with the”Find My" application on your iPhone or iPad, whether it’s at hand or on the other side of the world."

Also, of course, less than a week since the event, there’s already dozens of $1 cases available youknowhwere: 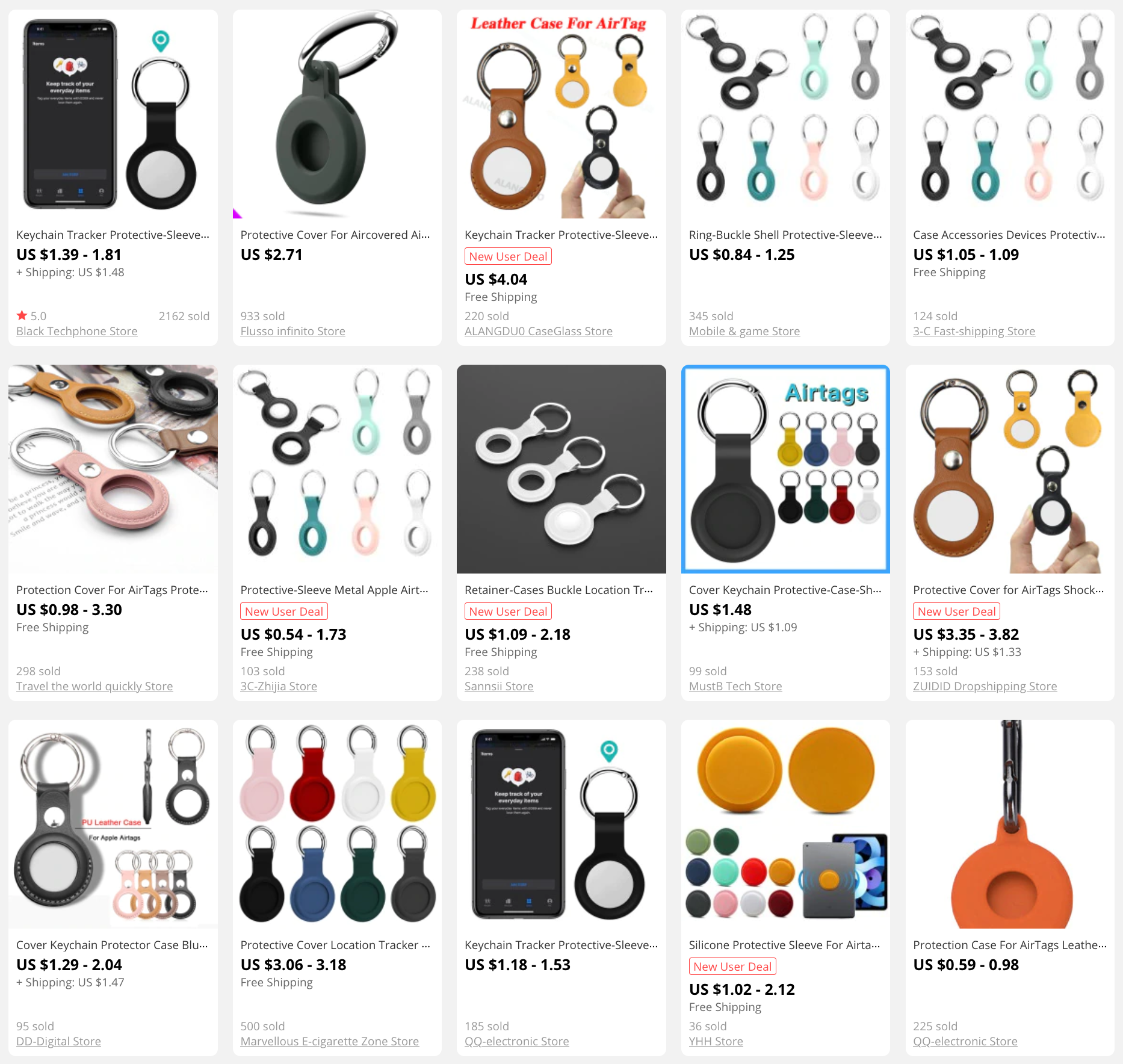 AirTags: great, but Apple completely misfired when it comes down to messaging the actual use cases and limitations for the general public. Also, stop engaging with companies growing cows just to kill them for skin. cows are not compatible with a sustainable planet going forward.

In 2021, Apple’s latest top-of-market micro-LED iPad Pro at 512 GB (wifi-only: $1299) is just $100 less than the highest spec 512 GB iPhone 12 Pro model ($1399). Really puts the profit margins of an iPhone into perspective when a 13" high quality iPad Pro display with the fastest mobile processor ever created sells for the same price as a single iPhone.

Surprisingly, iPad Pro with wifi+5G can be made cheaper than iPhone 12 Pro using a carrier $200 discount program, bringing the price down to $100 less than iPhone having a weaker CPU, smaller display, and slower networking3.

iPad Pro now tops out at 2 TB storage (patently wild!). Go back 20 years and tell this guy you can have 2 TB in a portable touchscreen capable of 10 Gbps wireless throughput via LAN or over 1 Gbps cellular throughput on Verizon infrastructure.

Each of those platforms have the exact same GPU and RAM options with performance only limited by per-device thermal budgets.

There is no physical—or at this point even spiritual—difference between the macOS and iOS hardware platforms, so it is only a matter of time before the grand unification comes to fruition.

The Future Apple Isn’t Telling You About Yet

After all, Intel is in the business of selling silicon as their primary trade vehicle, so their goal in life is to capture as much of the marginal leveling differences between price points as possible. You want a $37 CPU and a $42 CPU? great! Here’s two different CPU models. Oh, and you want to sell higher end products needing $200, $220, $240, $245, $255, and $267 CPUs? great! Here’s six more models!

Apple’s approach obviously doesn’t give one ratcrap about selling you silicon, they are selling products!

Motivations for chip building get turned upside down if you are a platform instead of a commodity. Suddenly you can explore custom-purpose architectures. Suddenly you can find a middle ground to flood your products with all the same chip design instead of needing 12 chips4, you can create One Chip To Rule Most Of Them All, With Lesser Models Absorbing Lesser Binned Chippies.

The future I see for Apple hardware is three or maybe four total consumer CPUs across their entire lineup:

…and it’s also good to remember the Mac dev units for ARM upgrading was just a standard unoptimized-for-desktop-workloads 2019 iPad CPU in a Mac Mini case—and it still outperformed most Intel chips. These things have tons of headroom given their performance vs. current workloads compared to the legacy Intel platforms everybody just fell hostage to for 30 years without anybody really noticing any problems.

Overall, the design I imagine going forward looks like: 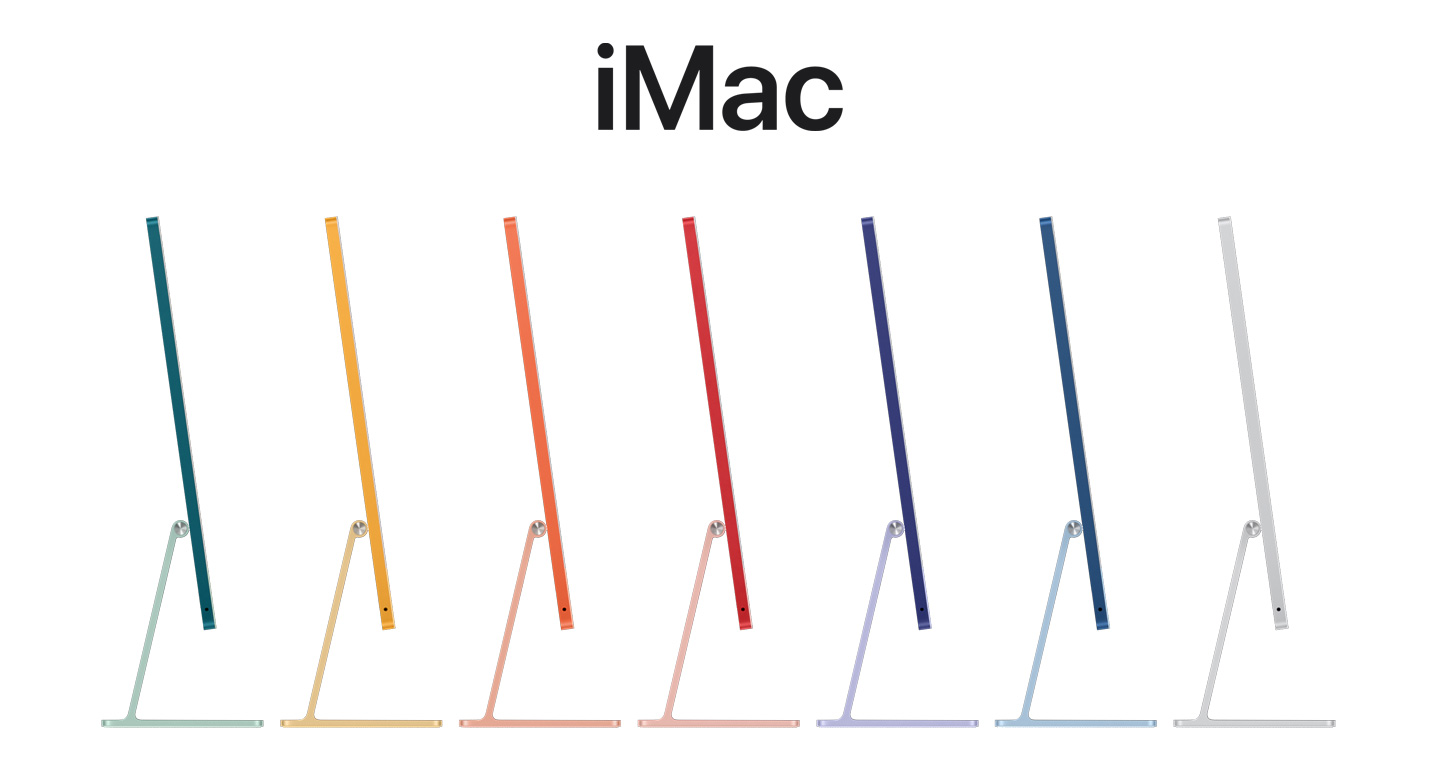 back to life back to reality 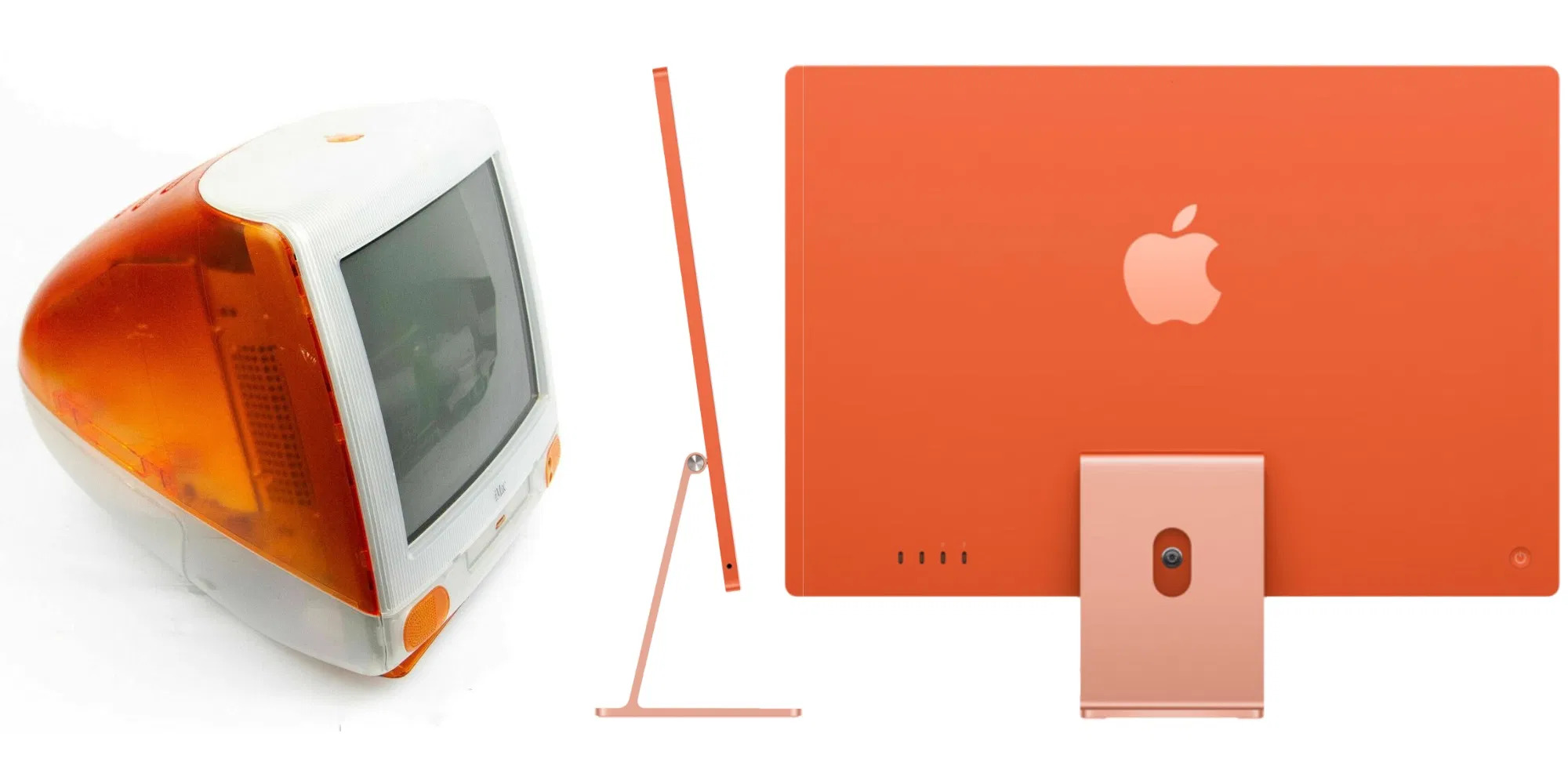 There’s not much new to cover except: the new guts of iMac is essentially an iPad-sized fully-integrated chipstick surrounded by speaker wells, and that’s the future of all low scale computing.

It’s everything you need for a modern computer, created the same way Apple has been designing systems for iPhone and iPad these past 10 years: a single stick just integrates everything.

The only difference with iM1Mac vs previous M1 releases seems to be iMac has larger dedicated thermal management than any other M1 yet with fans capable of cycling air through the chip volume more efficiently than MacBooks, iPad Pro, or Mac Mini (?). 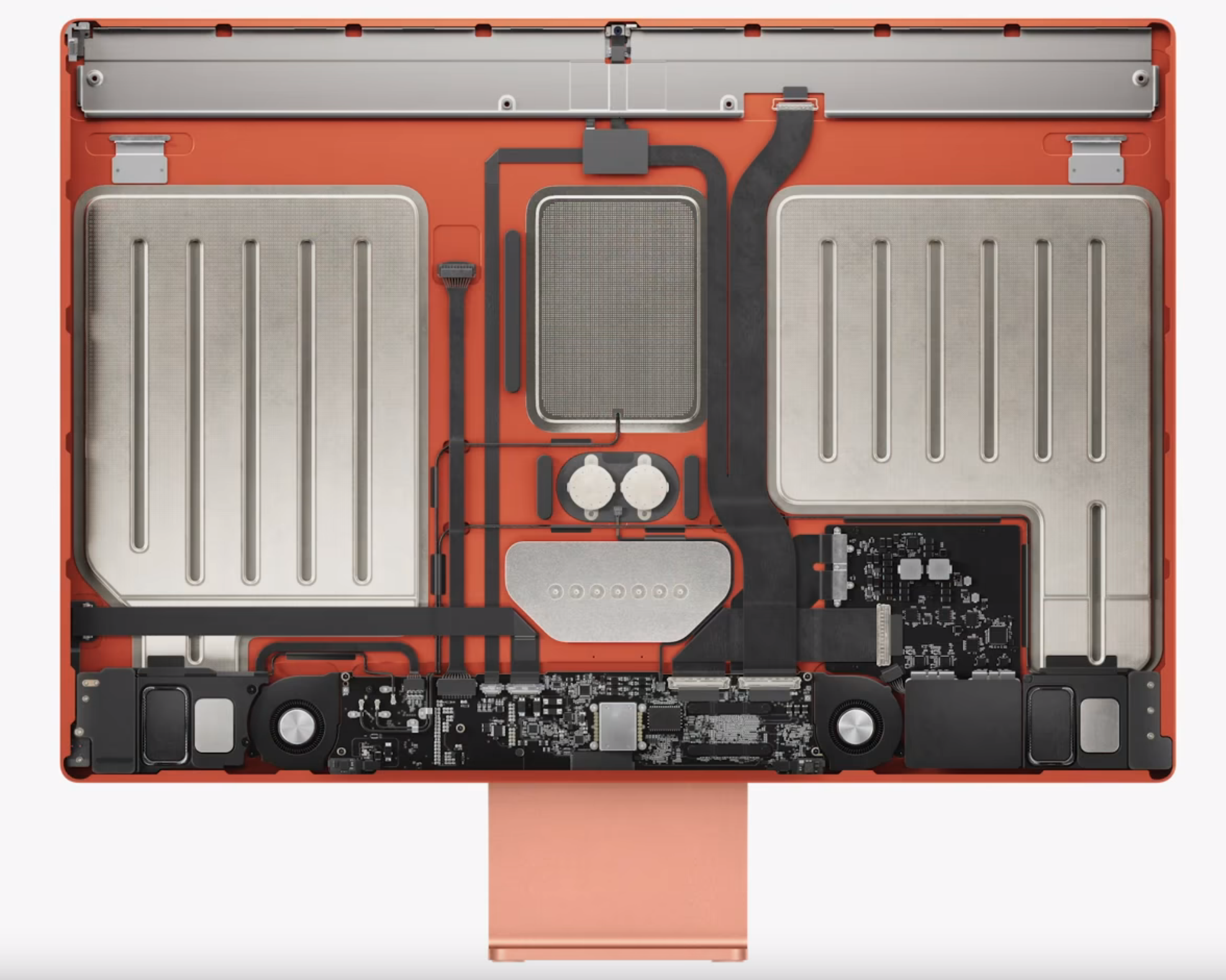 Overall the M1’ification of iMac is a great next step forward, but the “one chip for all low-compute” platforms has filled the entire product lineup so far. The next steps are MegaM1 for Mac Pro (720+ cores? 8+ TB RAM?) and proper MacBook Pro 16" (24 little, 16 big cores? 512+ GB RAM? one can dream).

Obviously Apple Is Doing This Next

Last year the macOS update took a huge (and poorly received) turn to larger interfaces (touch surfaces, right?) and less readability, less contrast, and more transparency everywhere (good for AR tech demos?). All these micro-interface-changes being slipped in over time are clearly to some productized end5.

Even the cheeky Apple execs hint something else is behind these laptop-desktop-class CPU additions to iPad Pro:

“And what a great thing for our customers, by the way, to know that they can buy a system today that still has headroom. It isn’t going to be immediately obsolete, which is often the case if they buy an inferior product – it’s obsolete from the day they bought it. Whereas, you know, iPad Pros continue to have headroom.”

(When asked again whether Apple is one of those developers that is planning to take advantage of the extra headroom with its professional app, Joz jokes that he’s not going to let something like that slip out.)

Can’t wait until we can get actual pro hardware on the Apple ARM platform with hopefully 256+ GB RAM laptops with 32+ cores and all without burning our fingers and laps like the 2015 MacBook Pro metal cases tend to do.